Soldiers at Rest in the Confederate Cemetery 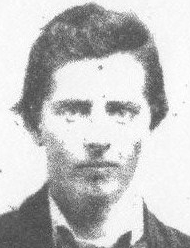 According to family history, Thomas L. Barnett was born November 29, 1839, in Bedford County, Tennessee. As a boy he emigrated with his parents, Isaac and Susan Hern Barnett and siblings George W., John, Catherine, and Isaac P. to Washington County, Arkansas. The family settled on Little Wild Cat Creek near present day Steele and tilled one of the best creek bottom farms in Northwest Arkansas. On December 18, 1859, Thomas married Susan E. Mount and they farmed a plot of land a half mile east of his parents’ farm. The Barnetts had two daughters; Tennessee was born in 1860 and Nancy was born in 1862.Thomas volunteered for Confederate service in Company A, 34th Regiment of the Arkansas Volunteer Infantry in August of 1862. He was killed at the Battle of Prairie Grove on December 7, 1862. Thomas’s widow and daughters lived with his parents for a time. Later, her brother, John Isham Mount and his family lived with Susan and daughters on the farm Thomas had operated before the war. John Mount served with the Confederacy also, but in 1881 he was assassinated on June 2, 1881, while serving as a deputy sheriff of Washington County. The 1880 census shows Susan E. Barnett as head of the household in Elm Springs Township, likely on the same farm that included her two daughters as well as Nancy’s husband John Taylor. From about 1892 until her death on February 2, 1912, Susan received a pension from the state of Arkansas based on Thomas’s service to the Confederacy. Thomas was buried in the Confederate Cemetery in Fayetteville and Susan was buried beside her parents and two siblings in the Mount Comfort Cemetery.

HARRISON, James M.  (1821-26 Mar 1906) Co. H 15th Ark. Inf. came from a Washington County, Arkansas, family living in the Cane Hill area. He enlisted early on with the 3rd Regiment, 1st Corps Army of Arkansas under the command of Colonel John R. Gratiot. His unit saw combat at Wilson’s Creek in Missouri on 10 August 1861 and later this unit disbanded and became part of the regular Confederate Army and he served with Company H of the 15th Arkansas Infantry, (McRae’s/Hobb’s) with the eventual rank of 3rd Lt. He was at the Battle of Pea Ridge on 6th and 7th of March 1862. His unit then marched on to Des Arc in Prairie County where it boarded a steamboat, Sovereign, landing in Memphis on 11 April 1862. His unit saw the remainder of its service in Mississippi. Lt. Harrison was seriously wounded at the Battle of Port Gibson, Mississippi on 1 May 1863. He was captured by the enemy after his regiment retreated. He never fully recovered from his wound and died after the surrender of Vicksburg on 4 July 1863. His body was then brought to Washington County, Arkansas. After the establishment of the Confederate Cemetery his remains were laid to rest there. More information about James Harrison can be found at the University of Arkansas Special Collections Library which documents his military service and letters.(1821-26 Mar 1906) Co. H 15th Ark. Inf.

HUTCHENSON, R.C.  The Southern Memorial Association received the following information by email in November of 2012: The page stated that you are seeking information on the men buried in the cemetery, and I believe I can shed light onto one of them. He is listed on this page as “R.C. Hutchenson”. It should actually be “Hutcheson”. R.C. stands for Richard; his middle name is most likely Capers, as his sister named her eldest son Richard Capers, but this has not been confirmed for this Richard. He is the son of another Richard C. Hutcheson, a native of Mecklenburg County, Virginia, and Nancy Isabella Wolf, daughter of Michael Wolf, and sister of Major Jacob Wolf, the owner of the famed Wolf House, the oldest standing structure in Arkansas which is now a national landmark. Now, “our” Richard C. Hutcheson is known to have died in the Civil War. He was serving in the Arkansas 14th Infantry (Powers’), though most of their early regimental records are lost and therefore he does not have a Civil War Service record. We do, however, have the letters of the surgeon of the 14th, a man named Dr. John Madison Casey. During the Civil War, he was courting Richard’s 1st cousin, Mollie Cummins Wolf, daughter of Major Jacob Wolf. Those letters have since been published; you can find the book here: http://www.amazon.com/Courting-Letters-Madison-Mollie-Cummins/dp/0971314136

In 2 of these letters, while serving in the 14th, he mentions Mollie’s cousin, Richard Hutcheson. In the first, he states that Richard is very ill. In the second, he mentions that Richard’s brother, John, is ill as well and is fearful of meeting his brother’s fate, because Richard had died. Richard is not mentioned anywhere else, but we know from these letters that he died while serving with the 14th, Dr. Casey’s and his brother John Hutcheson’s unit. I believe the “R.C. Hutchenson” buried in this cemetery to be our Richard. It was not uncommon for their last name to be misspelled. In my research, I have seen it as Hutchison, Hutchisson, Hutchinson, Hutchenson, and even Hutchecon; in some of his brother’s service record their name is mis-transcribed as Hutchenson, as I believe to be the case here. I have scoured Arkansas 1860 Census records for any other Richard, Robert, Riley, or just “R” and “R.C.” Hutcheson’s, Hutchinson’s, and Hutchenson’s to see if another man could potentially be this “R.C. Hutchenson” but have not found any other matches, so in conclusion I believe this man to be our Richard C. Hutcheson. Feel free to mention any of this information in any records you have regarding the cemetery. For more on Richard C. Hutcheson, you’ll find him in the 1850 Census and 1860 Census in North Fork, Izard, Arkansas (Richard “Hutcherson” and R.C. “Hutchison”, respectively). Please let me know if you believe my conclusion to be a sound one. Regards, Nathan Marks

THORNSBERRY, Hiram Pvt.  (1843 Scott Co., Virginia-1863) Co. C 30th Ark. Inf. Brook’s Regiment. According to the Madison County Cemetery book Vol 1 pg 139, Hiram was killed by bushwhackers walking along the road by Mill Creek, near Combs while on his way to St. Paul. He had been warned of the danger, but he went anyway. He had been working for the Christopher Walker family & was probably on his way back there after visiting with his father and brothers. He was buried at Pea Ridge, later to be moved to the Confederate Cemetery in Fayetteville.

LUCKETT, Henry (his grave is the 5th grave west of the cedar tree in the last row of Missouri graves)

TAYLOR, Whitson B. (1821-26 Mar 1906) Co. C 43rd Ala. Inf.(buried in Louisiana section) From the Fayetteville Democrat 22 February 1900: “Mr. W.B. Taylor died Tuesday at the residence of his nephew, Mr. J.F. Taylor, in this city, after a long illness of several months. The remains were buried in the Confederate Cemetery yesterday afternoon. “Uncle Whit” Taylor, as he was familiarly called, has been one of the best known men in Washington County since the settlement of the county. He came here when a young man and here he spent the remainder of his long life, having reached the age of 85. He always took an active interest in public affairs and his sympathy and influence were always with the toiling man. In his death, Washington County loses a great citizen. He was converted several years ago and died in full faith of the Christian religion.”

CIVILIANS BURIED IN THE CEMETERY

514 East Rock Street
Fayetteville, Arkansas 72701
479-824-3910
The Confederate Cemetery and the Walker Family Cemetery are open to visitors from dawn until dusk.
%d bloggers like this: